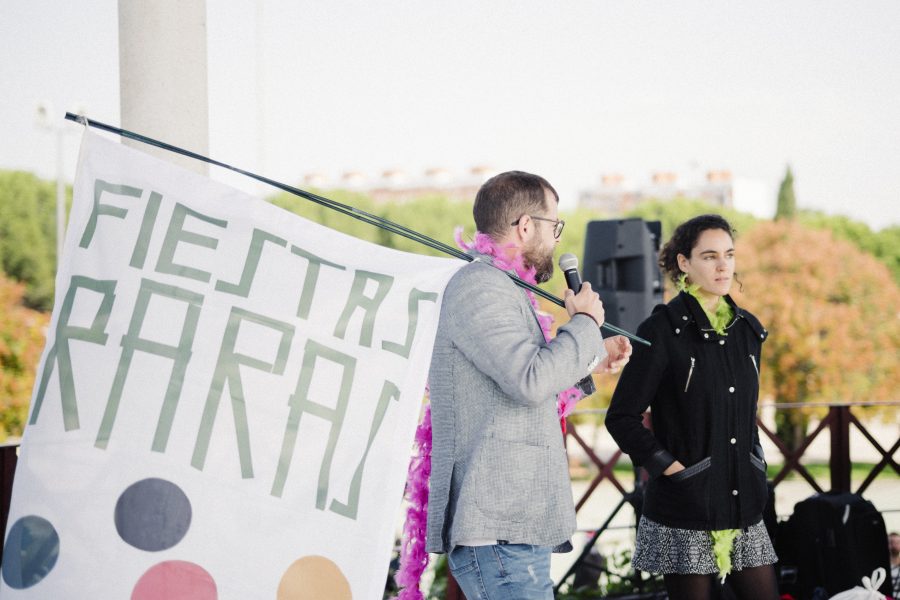 With Deviant Parties we sought to redefine a party by turning it into a political space from which the communities that inhabit a park can turn it into a space of expression. Pradolongo Park in Madrid is one of the biggest parks in the city, it is lived and inhabited by multiple communities, in which the party is one of the great manifestations of a way of being and doing this expression together.

Throughout 2018 and 2019, in the framework of Imagina Madrid, public and community art program, coordinated by Intermedia-Matadero (Madrid City Council) was how Deviant Parties came about, a process that claims the party as that right to make a city and as one of the places of desire from which to plot complicities. The weird thing here is a gamble to deconstruct the hegemonic, established, normative, that marginal space from which to think.

This constituent artistic practice took advantage of the methodology of popular festivals as those pedagogies of meeting up from which to co-create that grand final party that took place on April 7, 2019. Devices such as “the Party Commission” (la Comisión de Fiestas), the Rare Film Factory (la Fábrica de Cine Raro), “the Map of Memorable Parties” (el Mapeo de Fiestas Memorables) and “the Rare Making” (las Haceres Raros) made it possible for this festival to be created by more than 170 people through more than 50 hours of workshops, with the participation of 13 artists/collectives and with the collaboration of 17 associations /entities of the neighborhood.

The celebrations began with “the Divine Transvestite Head” la Cabezuda Travestida Divine as a way of translating an element as popular as the headless and continued with a Precarious Gateway since reporting the working conditions of domestic workers. The food was also a way to enunciate imbalances in the food chain. With “Informed Choreography Bodies that Appear” (Coreografía Participada Cuerpos que Aparecen)  we question who is present at the festivities and with the Transfeminist Jota dancing we subvert those ways of making tradition, as a bet to continue to rethink popular folklore. “Weird Poetry” (Poesías Raras)  and “Extensive Languages” (Lenguas Extensas) attended to what’s behind the weird talk and with “Choreography of Fight” (Coreografías de Lucha) we talk about migrations, starting from popular dances. It was about starting with a possibility, from all that knowledge transferred from generation to generation and to build from there new popular expressions from which to talk about inequalities that affect us.

Deviant Parties was a rare research, a commitment to think public sphere in another way. We produce the book The party, the deviant and the public space  edited by the independent publisher Bartlebooth